I enjoyed reading my blog’s year in review, so thought I would share the information. Thank you, blogging friends, for all the comments and likes. They mean a lot to me!

Sometimes it is fun to take my point and shoot on a casual walk and not worry about settings. I snapped a few photos this week and chose easy editing with quick Instagram-like Photoshop actions. I hope you enjoy the photos!

The Encore azalea photo shows about one third of our display. It has been lovely this year and really brightens up the view in our back yard. The hanging baskets are hanging in there, but slowly losing flowers and gaining fallen leaves in and around the stems. We have a few tomatoes trying to ripen at this late stage of the season. I miss having a ready supply of tomatoes and my thoughts often drift to planting seeds in about four months.

The bridge on our nature trail got a new coat of paint this fall. It is a nice place to pause and look over the edge for fish and animal tracks in the mud. With a typical daytime temperature of 80 degrees, we still have a lot of green leaves on the trees, but slowly the golds and reds are showing up. We see deer often now when we walk the trail! Some neighbors have set up feeding stations and the deer gather in late afternoon for snacks.

My friend, Cheryl, has a Border Collie puppy! Little Ally comes to visit us occasionally and we enjoy her so much! She is growing fast and quickly picking up on Cheryl’s training program. Cheryl is following Cesar Milan’s book for training puppies. Training for good manners is not easy. A Border Collie puppy is so full of energy and strongly driven by instinct to jump and try herding activity. But Ally is doing great at age 6 months. Cheryl will gradually introduce Ally to the opportunity to herd and practice agility courses. We are certainly having fun as “Aunt” and “Uncle” to Ally!

Changes are in the air and the winged things are even more delightful to watch. Hummingbirds are frantically active; chattering and fighting over the feeders we provide for them. They are molting at this time of year. We sometimes see tiny feathers fall as they hover near the feeders. I found one and saved it.

Carpenter bees are desperate to find the last grains of pollen. They especially like the sedum and basil flowers. This female worker was aware of my presence and constantly adjusted her position to face me and stay a comfortable distance. Persistence on my part paid off when she let down her guard for a moment.

Yellow leaves have already begun floating into the yard. We will have a lot to rake or blow into piles and bag. But I don’t mind. I like the exercise and being outside in the cool autumn air.

Numerous butterflies were a constant and welcome sight this summer. They are still visiting the butterfly bush from early morning until almost dark.

Summer went by quickly. But autumn is my favorite season, so I am welcoming it and getting ready to make some changes myself. Enjoy your week and remember to peek at the little winged things if you have them nearby!

Our feisty Ruby-throated hummingbirds arrived a little late this year. We put the feeders out in April and faithfully filled and cleaned them all summer. Finally in July, three birds decided to claim our yard as their territory. We love watching them fatten up for their long migration next month!

Today the cloudy sky created good light, so I set up my tripod, attached the remote shutter release, and carefully considered my camera settings. Determined to photograph the male hummingbird, I felt it would be easy since he was feeding and zipping around the yard all morning. I soon realized he was chasing other birds more than eating, so I needed a strategy. I decided to place all the feeders on the porch except the one in front of my camera. Then I added a misting spray of water from the garden hose to make the remaining feeder more interesting. The strategy worked and the male finally posed in all his orangey-red-throated glory! 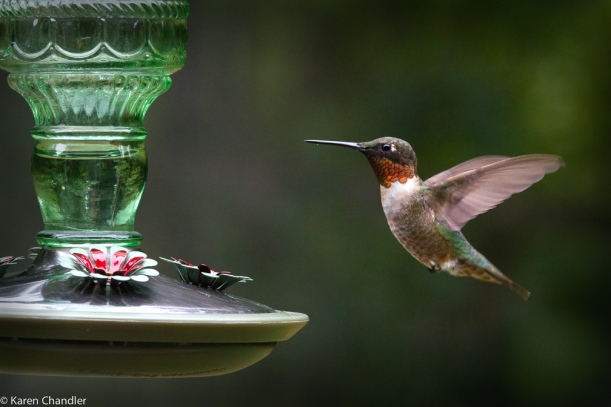 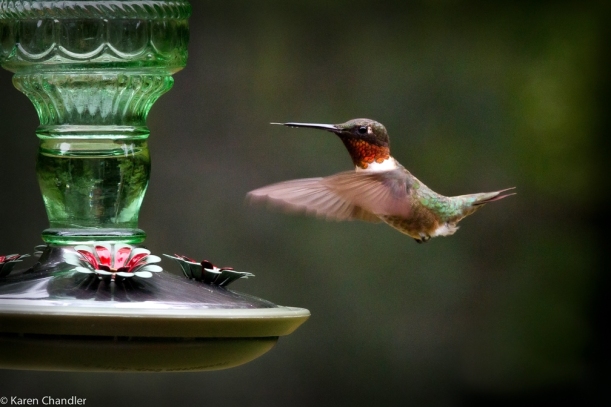 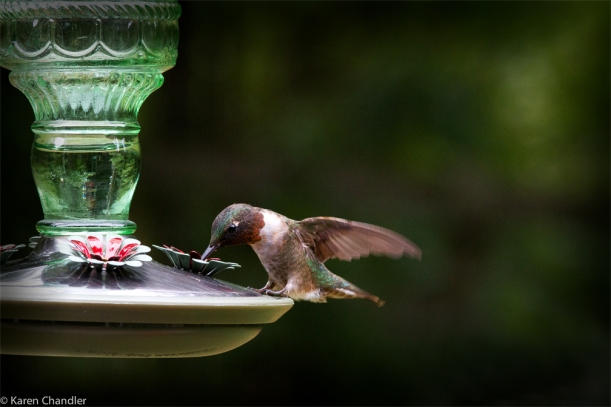 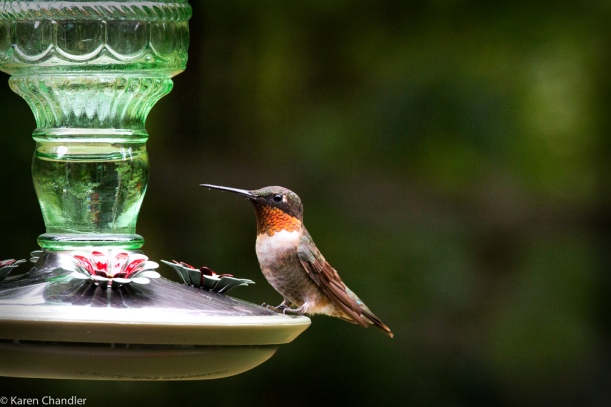 All photos: Canon 60D, aperture priority, RAW format, AI Servo AF, continuous high speed, partial metering, ISO 2000, 200mm, f/11, 1/250 for the perched photos and 1/400 and 1/500 for the flying photos. Exposure compensation: -1 to help produce a proper exposure of the lighter hummingbird on the darker green background. I set the focal point on the right flower port. When the hummingbird came into that plane of focus, the f/11 aperture allowed his eyes and most of his body to remain in focus. In post processing, I was able to retain most of the light feather texture, even after increasing the exposure by about 1 stop. I experimented with reducing noise in Nik Define 2.0, but ultimately decided to accept the noise generated from ISO 2000.

ScrapHappy Page Template Mini: Mega Photo is my new product for quick and easy digital scrapbook layouts. Use the templates as is, or modify with your own creative touches.

Digital scrapbook layouts print beautifully! I printed the layouts, then trimmed the pages and added to the album I created for Mallory, my grandniece. Memories to treasure! 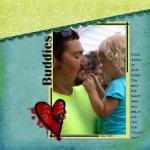 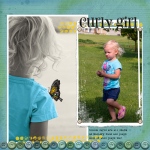 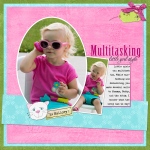 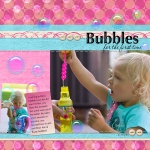 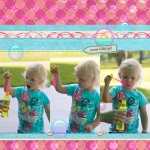 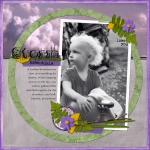 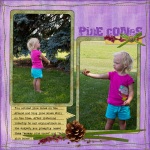 Holmes County, Ohio Part 2 includes an abandoned farm that was most recently owned by an Amish farmer. The first 6 photos are from that farm. Portions of siding are missing from the barn – probably an act of vandalism.

The last two photos show the house and part of the farmland near Shreve where my grandparents lived until 1958. When I look at the house, I can imagine my beloved Grandmother walking to the garden behind the house to cut rhubarb or pick beans. The outside of the house and yard has changed little since those days, except for new construction on the right side of the house. Obviously a fresh coat of paint would make the house look better. The last photo is a small part of the view from the yard. The view has not changed. I think that is remarkable and wonderful!

My recent trip to Ohio included visiting back roads in Holmes County. The textures of rust and faded paint were everywhere at the abandoned or nearly abandoned farms I discovered. I especially enjoyed photographing the windows and doors of old houses. I always wonder if the original residents had a happy life there so many years ago.

The turkey vulture photo was a bit disappointing. The location is a wide valley that was formerly a wetland. Turkey vultures perched all over the driftwood, but we startled them when we traveled the unpaved road and all but two flew away.

I will post Part 2 photos from Holmes County soon!

Designs on antique window frames, peeling paint, and rusted metal are the vintage elements I love to discover and photograph.  Our recent trip to my home state of Ohio included visits to back roads and small towns where I was fortunate to find some favorite photography subjects. I especially enjoyed discovering the beautifully detailed vintage house. It is currently under renovation and will eventually be a focal point on a quiet street near downtown Ashland.

We were fortunate to have good weather and a little more time than usual during our stay in Ohio. I was able to visit other rural areas in the north central part of the state and will be posting those photos soon.

One of my favorite plants is blooming! We grow the bigleaf species of hydrangea and one angel wing bush. I love these old-fashioned plants for the vibrant cool colors, but also because they are nearly maintenance free. The only care we provide is to fertilize them once or twice per year. We have not tried to change the colors by changing the pH of the soil. But it would be fun to try next year. I would love to see dark pink mixed with the blue and purple!

Thanks to my neighbor, Yvette, I was able to photograph an eastern box turtle today! She found him on her patio and gave him water while she waited for me to arrive. Our guess is that he was searching for water. Rainfall has been scarce this spring and judging from the turtle’s eager approach to the water, he was thirsty.

I placed the turtle on a large rock and shot the photos from various angles. I used a macro lens and handheld the camera. After the photo shoot, we returned him to the shade and his much-needed water.

Our baby cardinals are five days old. They will be ready to fly in six or seven days! They briefly woke when I gently moved the branches back and snapped two photos with my compact camera. Amazing how wild babies are so aware of their surroundings and how quickly they grow! I hope to take at least one more photo before they leave the nest.